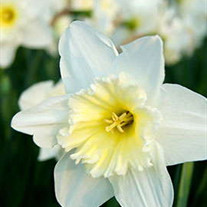 BOERNER, ADELINE B. 78 - of Mays Landing, went home to be with the Lord on February 6, 2011 at Mainland Manor Nursing Home In Pleasantville, after a lengthy illness. She was, born on December 2, 1932, raised In Mays Landing and was the daughter of Arthur and Adelaide (Liepe) Boerner. She attended Mays Landing School and graduated from Pleasantville High School, Class of 1950. In addition to her parents, Adeline was predeceased by her sisters Eleanor (Howard, Sr.) Bird and Dorothy Boerner, brothers Arthur Boerner, Jr, Walter Boerner and Henry Boerner and a nephew, Henry (Pam) Bird. She is survived by her brother, William (Catherine) Boerner, Sr. and sister Marion Boerner as well as three nephews; Howard (Deborah) Bird, Jr., Norman (Donene) Bird and William Boerner, Jr.; three nieces, Elaine Bird, Jean Boerner and Deborah (Michael) Ein, 14 great nieces and nephews and 14 great-great nieces and nephews. Adeline was a member of the Moravian Church and before her illness served as a sacristan and also served as an usher and Elder of the church. Alter graduating from high school she worked for the Atlantic City Electric Company in several departments and then in the Meter Department. When she retired in 1991 she was a Polyphase Meter Person. She enjoyed projects, such as upholstering and refinishing furniture. She loved horses and owned several over the years. Also, she enjoyed skiing in Vermont and vacationing in Wyoming. Funeral service for Adeline Boerner is scheduled for 11 am at the Moravian Church, 235 Boston Avenue, Egg Harbor City, NJ. Relatives and friends may call from 10:00 am until time of service on February 10, 2011. Burial will be at Union Cemetery, Mays Landing, NJ immediately following the service. Arrangements are under the supervision of Saraceno Funeral Home, 1114 White Horse Pike, Egg Harbor City, NJ. In lieu of flowers the family suggests donations be made in Adeline's memory to the Moravian Church, 235 Boston Avenue, Egg Harbor, NJ or to the charity of choice.

BOERNER, ADELINE B. 78 - of Mays Landing, went home to be with the Lord on February 6, 2011 at Mainland Manor Nursing Home In Pleasantville, after a lengthy illness. She was, born on December 2, 1932, raised In Mays Landing and was the daughter... View Obituary & Service Information

The family of Adeline Boerner created this Life Tributes page to make it easy to share your memories.