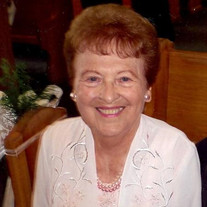 Arlene Hanselman Johns passed away suddenly on August 25, 2010. Arlene would have turned 80 on August 31, 2010. She was married to Lester Johns on August 26, 1950. She was president of South Egg Harbor PTA in Galloway Township and a member of South Egg Harbor Ladies Auxiliary since 1964. She was a devoted wife, caring mother, and loving grandmother. She and her husband were dedicated high school wrestling fans. They followed all the sports that their grandchildren were involved in. She is predeceased in death by her parents Henry and Gertrude Hanselman and sister Shirley Hayes. Those left to mourn her loss are her loving husband Lester, daughters Bonnie and Danny Emmer of Elwood, NJ, Nancy and Paul (rocky)Castellini of Dorothy, NJ , Leslie Johns of Debary, FL and Laurie Johns DeVito of Galloway, NJ. Arlene is survived by brothers George and Phyllis Hanselman, Henry and Teruko Hanselman, and sister Diane Hanselman Johns. She is also survived by her loving grandchildren Paul Castellini, Jeremy (Kelly) Emmer, Jason (Stephanie) Emmer, Chad Harper, David (Kelly) Castellini, Jamie (Gary) Jerue, Heather (Dan) Marzin, Jared (Christine) Emmer, Janet Becker, Alexis Jagger, and Francesca DeVito. She is survived by her great grandchildren Gabrielle Harper, Ryann, Kaya, Bradley Emmer, Brett Jerue and baby Castellini is due in February 2011. In lieu of flowers, donations can be sent to the Egg Harbor City Moravian Church 235 Boston Ave Egg Harbor City. Visitation will take place Friday August 27, 2010 at the Saraceno Funeral Home at 1114 White Horse Pike, Egg Harbor City from 6pm to 8pm. Saturday there will be visitation at Egg Harbor City Moravian Church from 9am to 10am with funeral service following afterwards at 10am. Internment will take place at Germania Cemetery. Online condolences can be sent to the family at www.saracenofuneralhome.com .

Arlene Hanselman Johns passed away suddenly on August 25, 2010. Arlene would have turned 80 on August 31, 2010. She was married to Lester Johns on August 26, 1950. She was president of South Egg Harbor PTA in Galloway Township and a member of... View Obituary & Service Information

The family of Arlene Johns created this Life Tributes page to make it easy to share your memories.