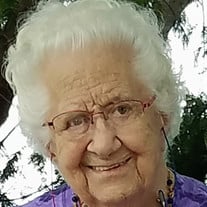 Bridget (Byrne) Dands, 97, passed away Thursday, Jan. 25, 2018 in Wilmington, D.E. The Visitation will be Saturday February 3, 2018 at the Church of the Assumption, located at 146 South Pitney Road in Galloway, NJ 08205. A Viewing at the church will be 10:00 AM to 11:00 AM followed by Mass 11:00 AM to 12:00 PM. Interment will follow at the Holy Cross Cemetery on 5061 Harding Highway (Rt-40) in Mays Landing, NJ. Bridget was known as "Bobbi" by all who were close was born Oct. 15, 1920 in County Roscommon, Ireland, the daughter of John and Mary Byrne. Bridget was trained and educated as a nurse in Manchester, England and moved to London in 1940 where she worked as a midwife during World War II. She met and fell in love with John Dands and they married on the Isle of Mann in 1948. After John was decommissioned in the Royal Air Force, Bobbi, John and their daughters Helen and Christine emigrated to the United States in 1953. They settled in Brooklyn, N.Y. where their daughter Irene was born. They later relocated to West Orange, N.J., and then Rahway N.J., in 1965. While living in Rahway, Bridget gave birth to two sons, John and George. Bridget also continued her successful career in nursing while working for Blue Cross in Newark, N.J. After many years in Rahway, Bridget and family relocated to Clark N.J., and then to Galloway in Atlantic County, N.J. where they retired. There they enjoyed Atlantic City and the Jersey coast beaches with their children and grandchildren. The last few years Bridget lived with her daughter Helen and son-in-law Bob Stevenson in Wilmington, Delaware. Bridget loved playing bingo several times a week at St. Anthony's and she enjoyed days out shopping and going for walks along the Wilmington Riverfront. She attended church weekly at St. Ann's church in Wilmington, Delaware. We were all blessed to have Bridget in our lives and she will be truly missed. Bridget is preceded in death by her husband of 64 years John Dands, her daughter Irene Corbo and son John Dands. She leaves behind her daughters, Helen Stevenson and Christine Dands-Greany; her son George Dands; nine grandchildren, six great-grandchildren, and many close friends.

The family of Bridget Dands created this Life Tributes page to make it easy to share your memories.