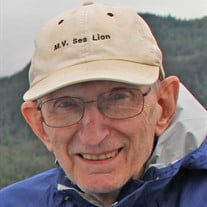 Edgar C. Bristow, 3rd, M.D. died on September 30, 2018 in Absecon, NJ. Born in Mt. Vernon, NY, he grew up in North Jersey, graduating from high school in West Orange. He received his B.S. in Biological Sciences from Rutgers University, completed work for high school science teaching certification at Montclair State Teachers College and received his M.D. from the University of Chicago School of Medicine. Following his internship at Stamford Hospital, CT, he served two years as medical officer with the 4th Infantry Division and at Valley Forge Army Hospital. He then completed formal medical training with a residency in Family Practice at Atlantic City Medical Center. Dr. Bristow was active on the staffs of Atlantic City Hospital and Shore Memorial Hospital in both family medicine and pediatrics. He was a Fellow of the Academy of Family Practice and was Board-Certified in Family Medicine. While in practice, he served on a number of committees at Shore Memorial Hospital and Atlantic City Hospital. He was school physician for many years for the Absecon Schools and served Absecon as team doctor for the Absecon Blue Devils and on the Board of Health, Welfare Board and most recently the Library Board. He also served as school physician at the Port Republic School for a number of years. He served on the board of the Atlantic County chapter of the American Red Cross. He was a Life Member of the American Academy of Family Physicians. He was a member of the Absecon Historical Society. He had a major interest in birdwatching and conservation for many years and served on a Strategic Planning Committee for the National Audubon Society. He was a founder and 4-time president of the Atlantic Audubon Society, a founder and president of the Garden State Audubon Council and founder and president of the Friends of Forsythe National Wildlife Refuge. He was a long time volunteer for the Forsythe Refuge and was active in a coalition of refuge support groups. He served on a mentoring team for new refuge Friends groups, as well as part of a planning group for the "Friends" program. He worked with the refuge education group presenting nature programs to school classes at various grade levels in local schools including Absecon. He was also involved for many years with the Avian Rehabilitation Center, and was chairman of the Smithville Conservation Foundation. He was a life member of the National Wildlife Federation, New Jersey Audubon Society, and held memberships in The Wilderness Society, National Parks & Conservation Association, Cousteau Society, Nature Conservancy, National Wildlife Refuge Association and New Jersey Conservation Foundation. He, along with his family, traveled extensively throughout the US and Canada as well as many trips to lands far and near. Photography was another hobby and he used his photos to bring his travels to many local groups. He was a recipient of the D.A.R. Conservation Award, the National Audubon Society's William Dutcher Award, Great Egret Award and Meritorious Service Award. In recent years he earned certification as a Volunteer Master Naturalist and Certified Interpretive Guide and worked with the environmental education group of the Friends of Forsythe. He was pre-deceased by his wife, Patricia Booye Bristow, and his daughter Carol. He is survived by daughter Barbara of Ipswich, MA, son Charles and his wife Diane Byers of Bloomington, IL. A memorial service will be held at St. Mark & All Saints, Pitney Rd., Galloway Township on October 13, 2018 at 2:00pm. In lieu of flowers, the family requests donations be made to either the Atlantic Audubon Society, P.O. Box 63, Absecon, NJ 08201 or Friends of Forsythe NWR, P.O. Box 355, Oceanville, NJ 08231. Arrangements by Lowenstein-Saraceno Funeral Home, Galloway.

The family of Edgar C Bristow created this Life Tributes page to make it easy to share your memories.