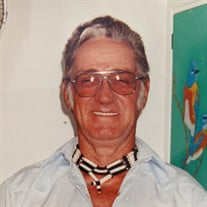 Link, Edward E., - 85, of Absecon, NJ passed away on Wednesday, June 16, 2021. Born in Atlantic City, NJ predeceased by his parents Harry and Ethel (Pettit) Souder, son, Duane Link and wife of 62 years, Patricia (Patsy Ann) Link. He was the youngest brother of five sisters and three brothers. He moved to Absecon in 1966. Edward was in the United States Navy as a Gunners Mate 3 serving on the USS Midway and USS Coral Sea 1954 – 1958, worked at the Coca Cola Company, a Utilities Group before landing a career with the Atlantic City Electric Company for over 20 years as a lineman, a short stint in the underground department and retiring as a foreman. Then AC Electric hired him back as a subcontractor for mark outs. Everyone knew him with his signature style: cowboy hat, western wear and boots. A wonderful family man, caring, supportive and a hard worker as he had a “Git ‘er done” attitude. Ed was a man’s man and a proud man. He was always ready with a smile and a helping hand. He enjoyed the comradery of his brother Bill (a former Marine) and the Marines at the local Marine Hall called Bunker Hill, helping with events, ceremonies, parades, roadside clean-ups and was made an Honorary Marine. An avid gardener and fisherman, he enjoyed fishing the back bays every chance he got eventually becoming a ‘Ramp Rat’. A back up driver/co-pilot/navigator to family and friends in need of assistance. Edward is survived by his Daughter, Sharon (Link) Agli and her Husband Frank Agli, Daughter Melissa Link, and his Son, Eugene Link, six grandchildren, Lt. Frank Agli, wife Deborah Agli, Austin, Spencer, Brandon Favro, Dayonara (Link) Petrizzo, Husband Dominick Petrizzo, AJ Glick and three great grandchildren, Avery, Archer and Ashton.

The family of Edward E Link created this Life Tributes page to make it easy to share your memories.