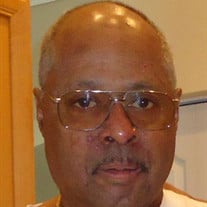 Edward Winfred Thompson, affectionately known as "Skip" to his family and friends, was born on July 24, 1945 in Jamaica, New York, to Edward Winfred Thompson, Sr. and Gladys Minton Thompson. He was the oldest of three children. Skip attended P.S. 116, Jr. High School 59 and Jamaica High School. He was married and had two children, Ronald Edward and Robin Gayle. He served three years as a Merchant Seaman for the Military Sea Transportation Service after which he relocated to Egg Harbor, New Jersey, where he resided until his death on December 9, 2011., Skip worked many years at Egg Harbor Yacht Company and most recently worked as a Restorative Aid at Health Center at Galloway in Galloway, New Jersey. Everyone who knew Skip can describe him as a big-hearted kind man who liked to dance; he liked to sing loud because he thought he had a fantastic voice. He loved to party with his family and friends. All anyone had to do was mention "party" and Skip was there before the music started. His immense love of fishing and golf also has to be mentioned. And, in addition, he loved to cook –he was known for his bar-b-que spareribs and sauce. Skip is survived by his two children, Ronald Edward Thompson of Miami, Florida, Robin Gayle Thompson Ingrum and husband Brian of Port St. Lucie, Florida; three grandchildren, Veronica Tennant of Galloway, New Jersey, Ivan Edward Ingrum and Jacob Daniel Ingrum of Port. St. Lucie Florida; one great-grandson, William Mtume Goodrum of Galloway, New Jersey; two sisters, Linda Edlow (Theodore, Jr.) of Viera, Florida and Joy Archie (Bobby) of Melbourne, Florida. Skip was also survived by his long-time companion, Barbara Jones of Egg Harbor, New Jersey, as well as a host of aunts, uncles, cousins, nieces, nephews and many many friends, all whom he loved and cherished. Please accept the family's deep thanks for all of your support and comforting condolences. Your kindness, thoughtfulness and love is so much appreciated. Visitation will take place Thursday December 15, 2011 at the Saraceno Funeral Home, Egg Harbor City from 11 AM till the time of service at 1PM. Entombment will take place in Florida.

The family of Edward Thompson created this Life Tributes page to make it easy to share your memories.

Edward Winfred Thompson, affectionately known as &quot;Skip&quot; to his...