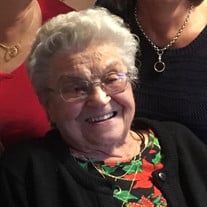 Esther Frontuto, 92 years of age, entered Heaven on May 2, 2020, while at home in Mays Landing, NJ. Born November 30, 1927 in Blakey, PA, she moved to Egg Harbor City with her husband, Jerry, in 1952. There, Esther and Jerry built their home on Boston Avenue, and raised their family. Esther was devoted to her Catholic Faith, and she was a vital member of St. Nicholas Parish serving on Parish Council, Altar and Rosary Society, and performing Communion calls as a Eucharistic Minister. Esther entered the workforce after her husband passed away in 1961. She worked in the law office of John Saalman in Egg Harbor City, then at Title Company of Jersey. Esther is survived by three children: Nick (Donna) Frontuto of Galloway, Phyllis Pitt of Egg Harbor Township, Ginger (Sandy) Fisher of Mays Landing. She is preceded in death by her husband Jerry, and her son-in-law, Frank. Esther also leaves to cherish her memory 6 grandchildren: Matt (Linda), Tara, Michael, Nicole(Allen), Andrew and Corey; 5 great grandchildren: Gabby(Andrew), Ben, Alexa, Jacob and Mackenzie; and 3.5 great great grandchildren: Aria Estelle, Austin, Allie and ?? Esther was a selfless person, always thinking of others before herself. She was loving, strong and courageous; teaching all of us how life should be lived. Preporations for Esther have been made by Saraceno Funeral Home, EHC, NJ. Burial will be at discretion of the family in Holy Cross Cemetery. We hope to have a Mass Celebrating Esther’s life after the Corona virus pandemic has passed. In lieu of flowers, the family requests donations in her memory be made to Atlantic City Rescue Mission, PO Box 5358, Atlantic City, NJ 08404; Community Foodbank of NJ, 6735 Black Horse Pike, EHT, NJ 08234; or Wounded Warrior Project: PO Box 758516, Topeka, Kansas 66675-8516.

Esther Frontuto, 92 years of age, entered Heaven on May 2, 2020, while at home in Mays Landing, NJ. Born November 30, 1927 in Blakey, PA, she moved to Egg Harbor City with her husband, Jerry, in 1952. There, Esther and Jerry built their home... View Obituary & Service Information

The family of Estelle Esther Frontuto created this Life Tributes page to make it easy to share your memories.