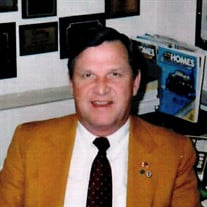 Glenn E. Kennedy, of Smithville, on January 18, 2022 - - hours short of his 89th birthday - - with family by his side. A native of Antler, Saskatchewan, Canada, son of Emma (Leist) and William “Thomas” Kennedy, he began his long career in the hospitality industry at “world famous” (his favorite expression) establishments starting in 1951 at The Banff Hotel then The Princess Hotel and The Castle Harbour in Bermuda. He then moved onto to The Everglades Club in Palm Beach, to The Greenbriar and north to The Cherry Hill Inn. In 1966, he managed Smithville’s Lantern Light Inn, becoming Smithville’s Food and Beverage Director. Mr. Kennedy finished his restaurant career in 1982 as the Maitre D’ at Claridge Casino’s gourmet London Pavilion, in Atlantic City. After a career change, he became a leading realtor for 30 years causing his co-workers to nickname him “Gene, Gene, the listing machine”! However, he was most proud of his career as “Dad.” As father to William (Ann), Timothy (Philane), John (Kathleen), Christopher (Kimberly) and KellyAnne (Marc), Glenn was happiest when surrounded by family, including 13 grandchildren, most of whom called him “Papa.” He has 5 great grandchildren. He was preceded in death by a son, Jeffrey, and granddaughters, Molly and Courtney. Despite the distance and years, Glenn kept close contact with his Canadian family, which included 9 brothers and sisters and 24 nieces and nephews. The simple joys of tomatoes from his garden, the music of Nat King Cole, his quirky perspective on life and its challenges, the benefit of a generous pour with an elegant dinner, encouraging his children to work hard, travel and love adventure like he did during his own international journey – simple lessons from Papa (another way he left his mark). He will be missed. Services are private.

The family of Glenn Kennedy created this Life Tributes page to make it easy to share your memories.