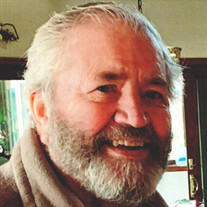 James “Jay” Minor Pierpont, 85, of Sweetwater, New Jersey passed away on March 4, 2022 in Titusville, Florida with his family by his side. Born January 20, 1937 in Pleasantville, New Jersey, the third son of Robert E. and Elise D. (White) Pierpont. Graduate of Pleasantville High School, Rider College in Trenton with a Bachelor’s Degree in Business and earning a Master Degree in Education from Glassboro State College. Mr. Pierpont was an educator: Teacher, Assistant Principal, Principal in his first career endeavors. Reinventing himself in a second career, Jay and Maria owned their own cleaning business in Florida for many years and retired to Sweetwater. Jay married Maria Haker, June 13, 1959, at St. Peter’s Catholic Church in Pleasantville, NJ. 62 years of marriage to her best friend Maria will miss the humor and love of her devoted husband. Survived by his daughter Anna Marie Pierpont and her husband Rick Reece, and grandchildren Matthew Lynch and Sarah Lynch and her husband Max Davis. Jay was preceded in death by his beautiful daughter Lisa Pierpont and will be buried near her at Holy Cross Cemetery on Saturday, March 12 at 11 am in Mays Landing, NJ. Older brother Robert “Bob” and his wife Marion (Welde) Pierpont survives him. Predeceased by younger brother Donald “Don” and his wife Tina (Jordano) Pierpont. Jay had many nieces and nephews who will keep is memory in their hearts and in their funny bones. Jay worked for years at Atlantic City Race Course, Shea Stadium in New York, Fair Grounds Race Course in New Orleans, LA and in Miami at Calder Race Track, Gulfstream Park and the former Miami Arena. Mr. Pierpont will be remembered fondly by many past students, colleagues, and 4-Hers of Atlantic County. Jay’s favorite memories were his quiet reflections with his brother and nephews at St. Joseph’s in the Hills in Malvern, PA, his family time at Chez Mimi, road trips in the station wagon and traveling with his adventurous partner Maria to Ireland. Memorial donations in Jay Pierpont's memory may be directed to Humane Society of Atlantic County, 1401 Absecon Blvd, Atlantic City, NJ 08401

The family of James "Jay" Minor Pierpont created this Life Tributes page to make it easy to share your memories.