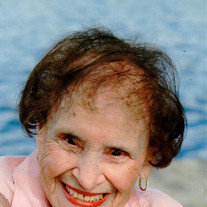 Hahn, Jennie M., (nee Tibberine) of Galloway, passed from this life on January 26, 2016 at 95 years of age surrounded by family and friends. Born in Atlantic City, NJ to Joseph and Rose Tibberine. She attended Atlantic City High School and worked various jobs in the resort including working at a doll factory, a well-known local bakery and during World War II as a bomb inspector for National Fireworks, Inc. housed in Mays Landing, NJ. She met the love of her life, Ernie on a blind date while he was stationed in Atlantic City during World War II. They later married on a weekend pass. They are still waiting for a reply from the army on the extension of that pass. The result of that pass lasted nearly 60 years. Jennie became a full time homemaker and mother to their four children. Her door was always open with a fresh pot of coffee on the stove and baked goods on the table. When the youngest entered school she went to work at Oceanville School as a cook. Teachers to this day remember her spaghetti sauce. She was a faithful member of the Church of Assumption, Our Lady of Perpetual Help Parish. She is predeceased by her beloved husband Ernie , six brothers and sisters, numerous nieces and nephews and her beloved friends from the Dum Dum Club. She leaves many cherished memories and many funny stories with her children Kenneth (Kathleen) Hahn of Egg Harbor Twp., Kathy (Don) Shannon of Galloway, Ernest (Carrie) Hahn of West Trenton and Gerald (Donna) Hahn of Ewing. She also leaves her loving grandchildren Kenneth (Jennifer) Hahn, Beth (Matt) Peele, Michael Shannon, Sara (Brian) Joy, Adam Shannon and Cassandra Hahn. She also regretfully leaves behind five sweet great grandchildren. Her sisters-in-law Velma and Arvella June from Howard South Dakota also survive her. Mass of Christian Burial will be held on Saturday, February 6, 2016 at 11:00 am at Our Lady of Perpetual Help Parish, 146 S. Pitney Rd., Galloway, where the viewing will be held from 10:00 am until time of Mass. Burial will follow in Atlantic City Cemetery. Donations may be made in Jennie's Memory to Our Lady of Perpetual Help Parish. Arrangements by Lowenstein-Saraceno Funeral Home, Galloway

The family of Jennie M Hahn created this Life Tributes page to make it easy to share your memories.

Hahn, Jennie M., (nee Tibberine) of Galloway, passed from this...