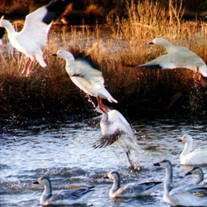 (Galloway, N.J.) John William Fox, Sr. was called to heaven Saturday April 29, 2017 after battling a brief illness. A resident of Absecon and Galloway, N.J. for more than 50 years, he was 86 years old. He was born in Bethlehem, Pa. September 22, 1930 to the late John J. Fox and the late Elizabeth Peters Fox. He is survived by his three children, John William Fox, Jr. (Diane) of Mays Landing, N.J.; Patti Fox Lang (Greg) of Absecon, N.J.; and Gregory Alan Fox (Mary Ann) of Longwood, Fl. He is also survived by his former wife, Marcia Bard Fox of Galloway, N.J., who remained close to John throughout his life and was Instrumental in helping him through numerous medical challenges. Fox was a graduate of Bethlehem, Pa. Liberty High School and attended Lafayette College in Easton, Pa. He worked in advertising and marketing most of his life, and began his career in newspaper, working for the former Bethlehem (Pa.) Globe-Times (1948-49), prior to joining the U.S. Army during the Korean War. He was among the first to serve in the National Security Agency, created by former President Harry S. Truman and continued in that service until his honorable discharge in 1954. Fox later worked for the Press of Atlantic City (1955-61), and the Philadelphia Inquirer (1961-63). In 1962, he founded Delaware Valley Communications and served as its President throughout his working life. He also worked for the Atlantic City Electric Company (1966-71) and the Atlantic City Convention & Visitors Bureau beginning in 1974. He retired from the Bureau as Vice President of Marketing in 1993, but remained active in advertising and marketing. His primary client was the Doylestown (Pa.) Tennis Club, which also satisfied his lifelong sporting passion: Tennis. His other passion was wildlife photography, which he most enjoyed while touring and documenting the Edwin B. Forsythe National Wildlife Refuge. Fox was blessed with seven grandchildren: Michael J. Fox (predeceased); Jennifer Fox Cressey (John) of Mays Landing, N.J.; Stephen Horvath of Cherry Hill, N.J.; Evan Horvath of Galloway, N.J.; and Ryan, Kevin and Colin Fox of Longwood, Fl. He is also survived by two Great-Grandchildren: Kane and Abby Cressey of Mays Landing, N.J. Further, Fox is survived by two half siblings: Margaret Fox Ferraro of Nazareth, Pa. and Richard Fox (Sharon) of Etters, Pa. He was predeceased by his half-sister Erma Fox Beattie of Egg Harbor City, N.J. Fox had recently moved to Spring Village at Galloway where his family would like to thank the management and staff, as well as Grace Healthcare Services (Hospice), both of which provided loving and compassionate care in his final days. Funeral service will be held on Wednesday, May 3, 2017 at 12:00 at Lowenstein-Saraceno Funeral Home, 58 S. New York Rd., Galloway, where the viewing will begin at 11:00 am until time of service. Burial is private. In lieu of flowers, please make donation checks payable to the scholarship fund in memory of John's Grandson, Michael: "Michael John Fox Foundation" 6160 White Oak Way, Mays Landing, N.J. 08330.

(Galloway, N.J.) John William Fox, Sr. was called to heaven Saturday April 29, 2017 after battling a brief illness. A resident of Absecon and Galloway, N.J. for more than 50 years, he was 86 years old. He was born in Bethlehem, Pa. September... View Obituary & Service Information

The family of John W Fox created this Life Tributes page to make it easy to share your memories.