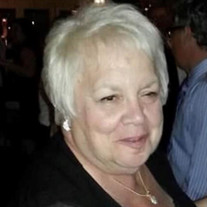 Kathy was a proud matriarch of a great, close-knit family that called her "Mamar." Kathy, born April 8, 1943, was a younger sister to her best friend Madeleine. With their parents, Sally and Henry Davis, they grew up in Flatbush, Brooklyn. She met her partner for life, Marvin Goldstein at a teenage party (not telling the then 19-year-old Marvin that she was only 15!). Soon began 63 years of wonderful charm, accomplishments and legacy building that the two of them created. They established this great, one-of-a kind family that we have now. Kathy followed her husband to Heidelberg, Germany while he was stationed there as a US Army MP. There they had their first child, Ira. They then moved back to Brooklyn, where they had their daughter, Michele. Kathy and Marvin moved their family (with dog Shane) to Staten Island in 1970 giving birth to the glue of the family, daughter Roni, and shared a house with Kathy's sister and niece, Madeleine (Maddy) and Randi. During this time they helped establish a "Friends Club" where 10 couples agreed to meet once a month. This unprecedented social gathering still exists today, as the core group tries to meet each other whenever possible. During the next decade, this family enjoyed taking many memorable vacations to South Florida to visit Sally and Henry in Sunrise, Florida. In the 80s her family and children extended to loved in-laws, with Denise, Pat, Arthur, and Billy joining the family. When Maddy passed in 1986, a saddened Kathy, vowed to guide beloved Randi and in 1987 her son Matthew, just as she would her own. Soon her one-and- only granddaughter, Mallory, named her Mamar. Along came other grandsons- Andrew, Jason, Ryan, Michael, Steven and baby Gee Matty. All close with her as well as each other, which made her proud. She added her bonus grandchild Alex in 2015 and then proudly welcomed her great grandsons, Mason and Hudson. She worked as a bookkeeper for Marvel Lighting and her pleasure came with her and Papa attending as many dance recitals, school events and sporting events her grandchildren were involved in, from town through college. Of course her biggest thrill was our famous multi (multi, multi, multi) family gatherings and shindings for holidays, occasions and no reasons. Although she will be missed, she knew and took pride in the love and admiration we all had for her and Papa. She knows we promise to always love her and remember her as she will live on in our hearts forever.

Kathy was a proud matriarch of a great, close-knit family that called her "Mamar." Kathy, born April 8, 1943, was a younger sister to her best friend Madeleine. With their parents, Sally and Henry Davis, they grew up in Flatbush, Brooklyn. She... View Obituary & Service Information

The family of Kathleen Goldstein created this Life Tributes page to make it easy to share your memories.

Kathy was a proud matriarch of a great, close-knit family that...