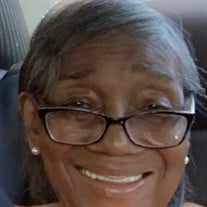 Mable Beatrice Burns was born on September 23, 1941, in West End, North Carolina. She was the eldest child of Addison and Caroline Burns. She was the older sister of her brother Willie, her sisters Caroline, Pearl, and Pauline Walker. Pauline and Mable took many vacations; they traveled the world. They visited Paris, Egypt, and Alaska, to mention a few of many destinations they traveled to. Mable received her formal education in her home state of North Carolina. In the early 1960’s, she moved to New York City and was the nanny of Gloria Vanderbilt. Subsequently, she began working in the health care industry. For over 30 years, she worked as a Home Health Aide, sometimes working 12-hour shifts, seven days a week. She would return home after work to care for her family. Mable leaves behind eleven children; six daughters, Faye, Barbara, Karen, Sharon, Tonya, and Tara, as well as her five sons James, Darryl, Gary, the late Javoghn and her son in law Bobby. She was blessed with 16 grandchildren and 22 great grandchildren. She also leaves to mourn Bennie McCallum, the father of her children, as well as numerous nieces, nephews, cousins, and close friends. Mable was an incredible cook. Her collard greens and yams were always the highlight of our family gatherings. She adored elephants and horses, and one of her hobbies was collecting miniature figurines of them. She was also a plant lover with a green thumb. Mable was a lovely, intelligent woman. You could always count on her for sound advice. She was an excellent listener, who would never lead you astray. She enjoyed watching television, her favorite genre was love stories. She was a huge blues music fan. Mable was well-known for her compassionate heart; she always prioritized the needs of others before her own. She will always be sorely missed but loved and remembered in our hearts.

Mable Beatrice Burns was born on September 23, 1941, in West End, North Carolina. She was the eldest child of Addison and Caroline Burns. She was the older sister of her brother Willie, her sisters Caroline, Pearl, and Pauline Walker. Pauline... View Obituary & Service Information

The family of Mable B Burns created this Life Tributes page to make it easy to share your memories.