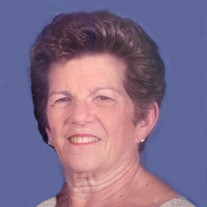 Marietta Iovelli was born in Brooklyn, NY in 1935. As the daughter to Joseph and Mary Tusa, her roots are engrained in the Bensonhurst Community as her father was one of the founding owners of the “West End Bakery.” A Graduate of Fontbonne Hall Academy, Marietta obtained a degree in Secretarial Sciences and began a career at the Moore McCormick Company. She spent her early years with siblings, Joseph (predeceased in 2018) and Phyllis Tusa Gatti. From the Tusa and Giacobbe families, she had many Aunts, Uncles and Cousins whom she shared special relationships with. There are many wonderful moments and memories that she always talked about and she remained in constant contact with many of them her entire life. Marietta met the love of her life when Leonard Iovelli was discharged from the U.S. Army, having served in the Korean War, at the DMV in late December 1955. He always said “just one look is all it took.” They married in February of 1958 at St. Finbar Church in Brooklyn, NY. Five children later their lives were full … happiness, chaos, a small home that somehow housed their family of seven and a revolving door that welcomed all. The home was loud! The family was loud! Loud voices, loud laughter, loud yelling… and everyone, whom they loved, was welcome to share the commotion. Marietta loved all the action as she was spunky, fiesty, full of energy and took pride in her “tiny but mighty’ demeanor of 4’10”and just under 100 1bs. She could stand up to just about anyone when the moment was called upon. These years were special as they were shared in the close company of her sister-in-law Mary (who also shared her birthday in life and now in death) and brother-in-law Jerry as the five Cerase children and five Iovelli children encompassed much of the child population on Bay 14th Street in Brooklyn. Neighbors that included her mother-in law, Laura Iovelli, whom she loved dearly and respected as well. As her children grew older and became more independent, Marietta decided to seek employment. She worked for several years at “Government Data Publications” with her sister-in-law Nancy Catania whom she also loved dearly and considered her a sister. She left this job when she and Leonard left their native Brooklyn to make way to Toms River, NJ with her sister, Phyllis and brother-in-law John – the four were always nseperable. Back in 1985, Marietta was diagnosed with a benign, in-operable brain tumor that challenged her for many years. Overcoming these challenges, she mastered many skills and talents. She loved to cook, sew, crochet, travel (by car, she mastered the art of map-reading) entertaining friends and family, bowling, playing mahjong, scrabble, solitaire on her ipad , Reading, dancing the foxtrot, taking the sun and being part of all the activities of her final home in the Lake Ridge Community. She travelled to many States and Cities within the U.S., Canada and Europe. Escorted by her dear Uncle Sonny, she travelled to Sciacca, Italy to research and deliver the family ancestry of her Sicillian “Giacobbe” grandparents. A fact-finding mission about Royal Ancestry, which proved somewhat accurate. Since then, every headband she donned was referred to as her tiara. Her husband, Leonard (or as she called him “Lee”) always putting her first, gave her everything and anything she wanted and treated her like a Queen.Survived by eleven grandchildren and the Mother to Leonard Jr., Joseph, Laura, Michael and Joann…Marietta’s heart fell hard upon the loss of her oldest son, Leonard A. Iovelli in June 2006. Her life took a solid turn and Marietta began to fall victim to her tumor. Her health began to change and more obsticals erupted. The more she was hit with, the more she fought;but eventually she lost her full vision in 2019. Unable to see, and with pandemic on us, her activity schedule was limited and (by the guidance of her niece Diana) she took on a new craft of bead making and created her #beadsbymarietta to pass her time. Many special-loved ones received a set of her wood crafts and in return she asked for donations to be made in honor of her favorite War Veteran, Leonard J. Iovelli. On April 18, 2021 Marietta lost the fight. She has entered into her eternal resting place with God, Our Lord Jesus Christ and so many pre-deceased beloved family members and friends. It is with heavy hearts that we say farewell to this beautiful woman (inside and out) our Mom. She leaves behind her beloved husband, Leonard J. Iovelli, her four remaining children and their spouses, Joseph and Julie Iovelli, Laura and Steven Maguire, Michael and Fracesca Iovelli and Joann and Glenn McCartney along with all of the grandchildren. Everyone whom she ever encountered adored her. It is with adoration and great sadness that our families will gather to

Marietta Iovelli was born in Brooklyn, NY in 1935. As the daughter to Joseph and Mary Tusa, her roots are engrained in the Bensonhurst Community as her father was one of the founding owners of the &#8220;West End Bakery.&#8221; A Graduate of... View Obituary & Service Information

The family of Marietta Iovelli created this Life Tributes page to make it easy to share your memories.

Marietta Iovelli was born in Brooklyn, NY in 1935. As the daughter...