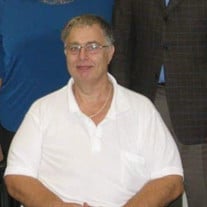 Raymond ("Ray") Dean Neate, age 60, of Egg Harbor City passed away on Thursday, December 5, 2019 at home in Egg Harbor City, after a year-long battle with cancer. Ray was born on April 8, 1959 in Sandusky, OH, and moved to New Jersey in 1988. He is survived his wife Shiela Diane Neate and his sons Ben and Dan. Ray is also survived by his siblings Rob (Tracey) Neate of Bellevue, Washington; Tom (Junice) Neate of Milan, Ohio; Mary Ann (John) Yerage of New Castle, Pennsylvania; and Dennis (Kristine) Neate of Medina, Ohio. Ray was predeceased in death by his parents, Paul Neate and Ann Neate, of Sandusky, Ohio. Ray loved outdoors and enjoyed hunting, trapping and fishing. He was proud of his garden and cooking. He was passionate about creating wood clocks, furniture and woodworking and was a loyal fan of the Dallas Cowboys. Most of all, he loved his family, who will miss him. For the last 23 years, Ray worked at Woodbine Developmental Center, holding various positions. He was a member of the Zion Lutheran Church in Egg Harbor City. Visitation will take place on Monday December 9, 2019 from 4 to 6 pm and on Tuesday December 10, 2019 10 to 11 am at the Zion Lutheran Church 312 Philadelphia Ave, Egg Harbor City, NJ. A funeral service will be held on Tuesday December 10, 2019 from 11 to 12 noon at the Zion Lutheran Church. Interment will be held at a later date near Ray's birthplace in Sandusky, Ohio. In lieu of flowers the family request donations to the Zion Lutheran Church in his name.

The family of Raymond Dean Neate created this Life Tributes page to make it easy to share your memories.