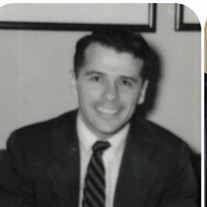 age 95, died peacefully at “The Gardens” assisted living facility in Port Saint Lucie, Florida on November 23, 2019.   He was an internationally recognized authority in reading education. Born on July 31, 1924 in Boston, Massachusetts, Richard was the son of Alfred Lawrence Boning (1894-1982) and Katherine Pauline Doyle (1893-1975). He was a twin to Thomas Henry Boning (1924-1977) and had two other siblings, Alfred Lawrence (1922-1979) and Alice (1927-2011).  After Richard’s birth, the Boning family relocated to Wilmington, Delaware.  There, Richard participated in boxing at the local YMCA and was a member of the Wilmington High School football team.  He graduated in 1941, and finished one semester at the University of Delaware before being drafted into the military.During WWII, Richard served in the Army Air Force.  He was a waist gunner on B-17 bombers, and was stationed in Florida, California, and Texas.  While serving, he completed two semesters at Texas A&M University.  After the war, Richard attended Providence College in Rhode Island. He graduated in 1950 with a bachelor’s degree in education.  In 1951, he moved with his twin brother to New York City.  He taught reading in Baldwin, New York.  While working as a public school teacher, he received a master’s degree from Hunter College.Richard moved to Baldwin, New York in 1954. He met Mary Ruth Hamilton (1929-2019), who was working as a music teacher in the neighboring town of Freeport. Richard married Mary on December 21, 1956, in Wolfgang, Germany.In collaboration with his twin brother, Richard developed materials aimed at improving reading comprehension.  Together, they founded Barnell Loft, Ltd.  This company grew into one of the largest privately owned educational publishing companies in the country.  Richard authored more than 450 books for children and young adults.  He was also an accomplished public speaker.  He had diverse interests, including: genealogy, painting, modern art, politics, human evolution, language, travel, astrophysics, history, Acadian culture, University of Notre Dame football, and country music.   Richard retired in 1989. Thereafter, he spent much of his time in Florida, residing in Sewall’s Point, Palm City, and Port Saint Lucie.  He was predeceased by his wife, his parents, and all three siblings.  He is survived by his two children, Charles Richard Boning and Katherine Emily (Boning) Dickson, four grandchildren, and other relatives.  Saraceno Funeral Home 1114 White Horse Pike Egg Harbor City, NJ

The family of Richard Allen Boning created this Life Tributes page to make it easy to share your memories.