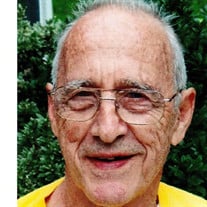 Hesse, Sr., Richard W., - 91 of Egg Harbor City, NJ born at home August 4, 1930, passed away February 17, 2022. Richard was born in Egg Harbor City. He was a veteran of the Korean War, stationed in Germany. Richard graduated from Egg Harbor City High School, class of 1948. He worked at Nurre Mirror Factory until 1961 and Central Glass Co. until he retired in 1995. He enjoyed working side by side with his sons on their home building projects. Richard could find a way to do anything and enjoyed the challenge. Richard looked forward to getting together with the “McDonald’s Crew” every morning prior to covid. He also liked attending yard sales, collecting antiques, and selling his finds at antique shows. In his earlier years he loved playing softball, golf and bowhunting. During the later years his hobbies shifted to drawing and decoy carving. Richard was predeceased by Lauretta, his loving wife of 62 years, his parents Alphonse and Anna Hesse (Camillo), his sister Joan Haes and brother Robert. He is survived by his four children Richard Jr. (Kim) of Egg Harbor City, Larry (Cindy) of Germania, Karen Young (Gary) of Orlando Florida, and John (Corinne) of Laureldale and seven grandchildren, Christina (Dave), Brittany (Billy), Brandon (Paige), Samantha, Johnny (Erin), Tyler (Amanda), Kyle (Lauren) and Jason. Also, five great grandchildren, Shaeley, Olivia, Brady, David and Thomas. Richard is also survived by his brothers Ronald and William. The family would like to thank Atlantic Care Hospice, with special thanks to Terri, Leanne and Alexis. Also, the family would like to thank Richard’s caregiver Joe, for the wonderful care and compassion he demonstrated daily. In lieu of flowers, memorial contributions may be made to Atlantic Care Hospice: 6550 Delilah Rd. Bld. 300 Ste. 200 Egg Harbor Twp., NJ 08234 Services are private.

The family of Richard Hesse Sr. created this Life Tributes page to make it easy to share your memories.