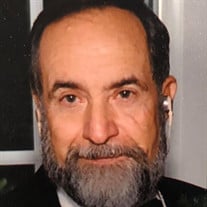 Samuel W. Jordan 82 passed away on February 16, 2022. He is survived by his wife of 59 years, Carol (Branca) Jordan, brother William Jordan of Estell Manor, daughter Donna Jordan of Mays Landing, her children Rachel Husted (Robert) of FL., great- grandchildren Samantha and Jason , Krystal Emerson (Seth) of ME. great-grandchildren Madeline, Parker, Noah and Hope. Donald Carrier (Jackie)of DE., John Miller of NJ and daughter Carol Jordan-Fowler (Harry)of Mays Landing, her children Warren, Violet, KateLynn and Jai’ Leigh. Samuel was born at home in Mays Landing, NJ on July 2, 1939. He is a graduate of Pleasantville High School and served in the U.S. Army. Met his love Carol and married in the 60’s, and went on to have 2 daughters,8 grandchildren and 8 great-grandchildren. Sam was also known as Spike, Bucky and his favorite Pa-Pah. Lifelong waterman and outdoorsman, he could captivate an audience with many a fish tales of fun or failed rabbit or deer hunts. Proud member of the Buckshot Gunning Club from back in the day, and an avid trainer of rabbit hounds known locally for having the best dogs. He enjoyed all sports and usually excelled to whatever he put his mind too. Baseball was a passion, horseracing a must, Gardener extraordinaire, a reader, a published writer, a poet at heart. Man of sometimes few words, but many thoughts. He owned and operated a clam hatchery for most of his adult livelihood off Atlantic City. A clammer by trade, a writer at heart, teacher to all. Great “all around guy.” Devoted and loving husband, father, son, brother, brother-in-law, uncle Buck, grandfather, great grandfather, or friend. He had an amazing sense of comedic timing and brought the room to tears with some of his antics. He is loved and will be missed by many. If you acquired one of his famed Nicknames, you were loved unconditionally, and cherished till the end. “Time Nor Tide Waits for No Man” was a favorite saying to him. Born and raised in Mays Landing to Sam and Sadie, before hanging up his waders . And when he found out he had the onset of Alzheimer's and Dementia...He would tease...Here’s to forgetting more than you’ll ever know! In lieu of flowers donations can be made to the National Veterans Association.

The family of Samuel W Jordan created this Life Tributes page to make it easy to share your memories.