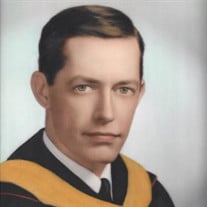 Thomas R. Murray, 83, of Galloway, NJ passed away on June 13th, following a long illness. Tom’s struggle against his illness ended peacefully, at home. Tom is survived by Barbara, his beloved wife of 58 years, sons Tom and Jim, daughter Janet Reeber, granddaughter Olivia Reeber, and many loving nieces, nephews, extended family, and friends. Tom was born and grew up in Philadelphia. It was in Philadelphia that Tom met and married his first and only sweetheart Barbara (née Dougherty). Tom was generally serious but also had a mischievous sense of fun. He got great pleasure from good-natured kidding and perpetrated elaborate pranks. He once made a bunch of snowballs from frost scraped from a freezer. He proceeded to toss these at local boys playing in his yard. The boys stood stunned in the July sun, then collapsed in hilarity. Tom’s professional career was a classic mailroom-to-boardroom success story. Tom started working at Hahnemann Hospital while attending night classes at St. Joseph’s University, where he earned a Bachelor’s degree. He went on to hold executive leadership positions at Jefferson University, Albany Medical College, and the American College of Physicians. Tom was tenacious and positively competitive. He expected excellence of himself, and inspired and pushed others to the same. He was hard-working, supportive, practical, and above all generous. He was always there to provide moral (and material) support to relatives and friends, helping to advance personal, educational, and financial goals. Tom and Barbara enjoyed hosting large gatherings at their home to celebrate holidays and other important events. Many share fond memories of Tom and Barbara’s openhanded hospitality and the warmth of their household. Tom also enjoyed tennis. Partners and competitors alike were impressed by the zen-like calm he applied to perfecting his serve, and correcting a tendency to double fault. Memorial donations may be made to the Alzheimer’s Association.

The family of Thomas R Murray created this Life Tributes page to make it easy to share your memories.